Client of the Month: Wilma 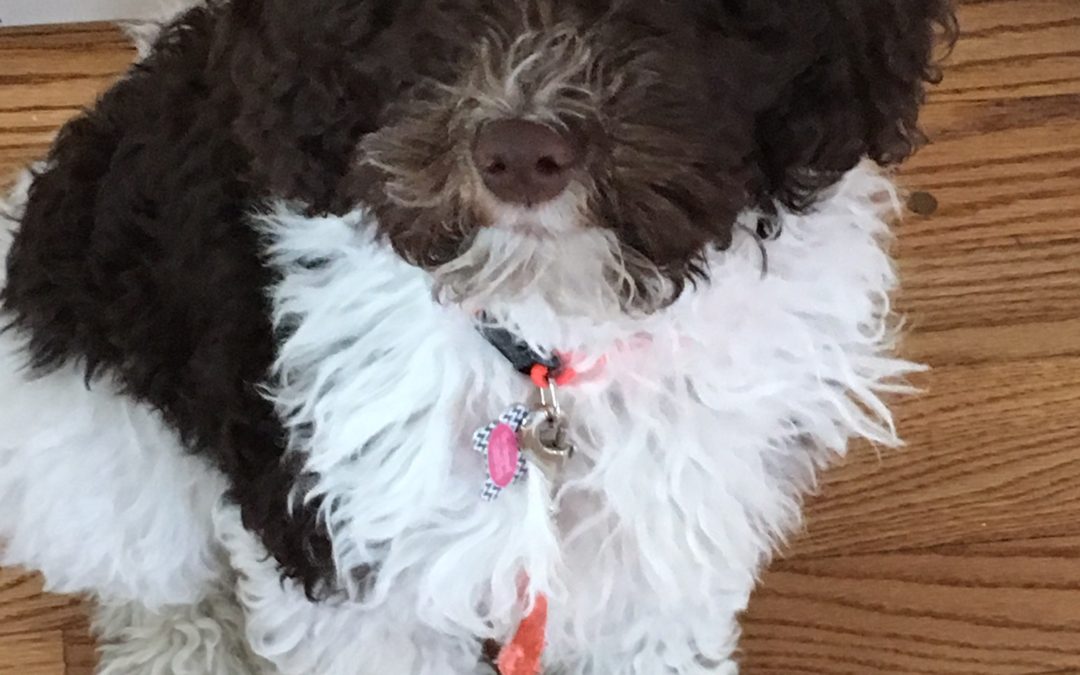 Liz and her husband Mike were excited when their 8 week puppy finally came home. However, they had hoped that they would be home with their new pup during the summer, when they could spend more time with her. However, their puppy wasn’t ready until October. No matter, Wilma was worth the wait.

Wilma, a chocolate and white double doodle, was a little puppy with a big personality. “We knew that we didn’t want her home alone during the day when she was so small,” says owner Liz. “We didn’t want her developing bad habits, and we knew that the more attention she could get while we weren’t home could mean that she would potty train easier.” Liz and Mike started searching for local training studios that could meet their needs.

They started with a local studio…that wasn’t Dog Training Now. “We tried this studio for a week,” explains Liz. “I just had a bad feeling about it. Wilma came home jittery and smelly. I just didn’t feel comfortable there.” After only a week, Liz and Mike knew that they wanted to switch, and they decided to try Dog Training Now.

Wilma was enrolled in the Puppy Potty Training Program and after the first day, Liz knew they had made the right decision. “By the second morning, Wilma was visibly excited when we got to the studio. By the third morning there, she was excited to get inside the gates and run towards the Trainers.” It was love at first sight for Wilma, for Liz and Mike, and for the Trainers, who loved snuggling little Wilma any chance they could get.

After a successful Potty Training Program, Wilma and her owners headed off to Puppy Preschool at Dog Training Now. Puppy Preschool was a great opportunity for Wilma to be socialized – with other puppies and with other humans – and for Liz and Mike to gain some confidence in a failure-free (and judgment-free) environment. “We loved that Preschool was a safe environment for us to expose Wilma to things she doesn’t get at home, like new people and other pups,” said Liz.

After graduating from Preschool, Wilma was ready for her next big training step – one week of Day Training and one week of Boot Camp with Trainer Marcus. “I was never worried about her, not for one second,” says Liz. “We trust the Trainers at Dog Training Now and nothing but confidence in the team there.” Wilma passed her 2 week training course with flying colors, and Liz is loving the results.

Wilma now has excellent leash manners. She goes on walks like a champ, and never pulls or lunges at other dogs. She is a pro at potty training, not having an accident in months, even with the extra freedom of spending her days in the laundry room instead of a crate. Liz uses the Place command often, especially during meals and when entertaining. When guests do come over, Wilma doesn’t jump up, instead waiting patiently for some attention and affection.

Wilma is now a 5 month old puppy who Is as obedient as she is fluffy (and cute). She is an excellent companion who knows her boundaries and who the boss of the family is (it isn’t her!). If you are wondering what you need to do to get your dog as obedient as little Wilma, give us a call to set up a consultation based on your dog and family lifestyle. We’ll get you there!