Client of the Month: Colleen, Mavrick, and Amos

He made a lousy first impression!  JC was his name, and he was up for adoption at Animal House Shelter in Huntley, IL.  He met several families during his time there, but after each meeting, he was left at the shelter.  The culprit?  He’s such a happy, high energy pup, that he seemed out of control, and a bigger project than some owners were willing to take on.  How ironic that his love of people was holding him back from finding a loving family to call his own! 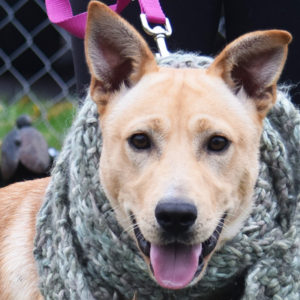 An image from JC’s adoption listing at Animal House Shelter

What better pup to be the recipient of Dog Training Now’s first “5-Star Training Award”?  This new program started by Dog Training Now pledges a 10-Day Day Training program to a dog in a local shelter who is struggling to find a home.  Every time that Dog Training Now earns 20 5-Star reviews on Google, Yelp, or Facebook, we attach our amazing obedience training to a pup to help a family get over the finish line, and commit to bringing him home!

Enter Colleen and Mavrick.  They came to Animal House looking for a pup, and when they met Amos, they found a very loving, affectionate dog with “high, high energy, definitely something we knew would be lots of work going into it”.  When Animal House’s adoption counselor told them that JC had 10 days of free obedience training attached to him, that was it!  He had found a home, and all that was left was a name!

He came to us as Amos.  New name, same goofy energy, and today, he graduates from his 10-Day Day Training program, having learned how to walk nicely on a leash, sit and stay until released, stop jumping up on people, lay down and stay, as well as the amazing place command.  “Day 1, we picked him up and immediately saw a change in his temperament, and that was huge for us” says Colleen.  “It’s not just skills, it’s well rounded”.  Mavrick added “After Day 1, he was much more controlled and docile in a good way, he wasn’t as uncontrollably energetic as he was before”. 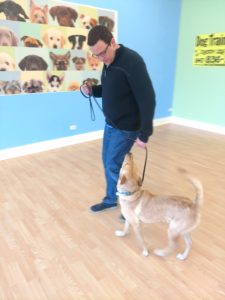 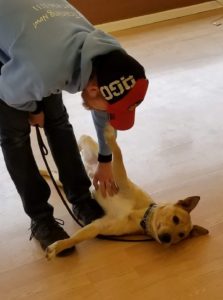 Now, ten days later, when asked how Amos makes them feel now, Colleen responds with a laugh and “love, love, love!”  She continued “we wanted him to be that lovable dog that he is, but in a controlled way, and now we can give him back that intense love that he so desperately wants to give us.” 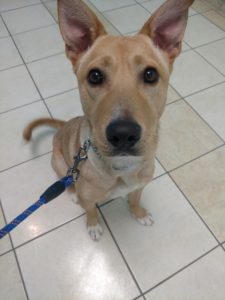 Our amazing clients have been so generous, telling the world about how we’ve been able to help strengthen the bond between owner and dog.  Even better, we’ve earned enough 5-Star reviews that we’re able to donate training to another dog, and we’re currently in the process of selecting the pup, and we’re well on our way to a third!  If you feel that we’ve earned it, please help us get to our next 20 target on Google, Yelp, or Facebook.

We love the chance to work with clients like Colleen and Mavrick and their dog Amos. Our Trainers are ready to work with your family too, giving just as much attention and care to you as to your dog. Give us a call to take the first step to a more obedient dog by setting up a consultation. We will see you soon!