Client of the Month: Jabba 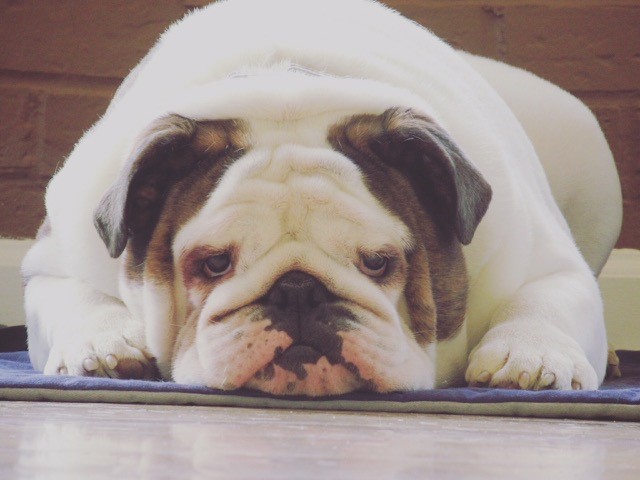 Jabba is definitely one of the most distinctive dogs that Dog Training Now gets to work with!  There’s no missing this big boy with his classic bulldog mug!  He and his owner Nikki have been coming to Dog Training Now since he was a just a puppy, and we felt that it was time that we recognize them as our Client of the Month!

We asked Nikki a few questions, and her answers were so perfect, that we figured that we’d let you hear it right from the horse’s mouth (no, Nikki, we’re not calling you a horse!):

What was your goal with DTN?  What did your dog do that caused you to reach out?

As previous English Bulldog owners, we have firsthand knowledge about their stubborn demeanor. Our previous bully, Buddha, although he was a sweetie, would be a bit difficult at times and as he aged, he would become a curmudgeon with other dogs. We always brushed off his age and the breed for our ability to not train him (although now I realize that with the proper training, any age is feasible). We were fortunate enough to have him in our lives for 11 years. After he passed, it was a few years before we felt we were strong enough to consider a new pup.

Fast forward to April 2016 when our beloved Jabba joined our family. We did not want to make the same mistake of not having proper training in place. Immediately after joining our family, we enrolled Jabba in the Puppy Pre-school program. Also during that time, we would have Jabba join the Puppy Day Camp as well to help support us during the potty training process while we were at work. Both experiences were fantastic. Each week during Puppy Preschool, we learned a new trick that we still use to this day. It was great to have Jabba introduced/interact with other pups where DTN would help us break him of any perceived aggressive behavior and identify the distinction between normal play and aggressive behavior, which is sometimes hard to gauge. After Preschool, he entered the 10-Day Day Training program. 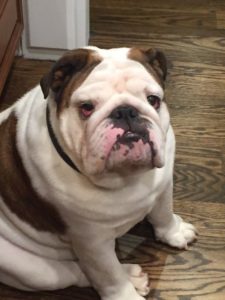 What was your first impression of DTN?  Did that change during training?

Truth be told… Puppy Preschool was a no-brainer as it was not overly costly, but when it came to the 10-Day Day Training program, I was a bit apprehensive to enroll due to the cost-factor. However, the LOVE (more on that in a minute), care and knowledge/expertise that the training staff demonstrated throughout every initial experience told me that the 10-Day Day Training program was a necessary investment in Jabba’s life.

Did that impression change? Heck yes!! The VALUE we got from the program far-outweighed the price of the program itself – it was money well-spent! I will wholeheartedly tell (and will continue to shout through the rooftops) anybody who is nervous to enroll that the dividends you receive from this comprehensive training far exceeds the investment you make.  Ultimately, you can’t put a price tag on people caring for our beloved pet – they are our family members – and helping them reach their potential. The team truly treats your pup as if they were their own.

I also love that while Jabba is a stubborn bulldog, they didn’t accept that as an excuse for him to effectively learn. 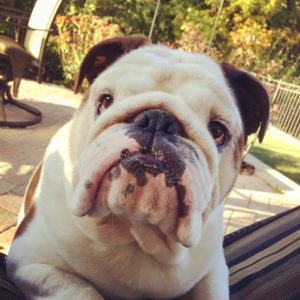 Did our staff member(s) do something especially well when working with you during the process?

If you previously haven’t owned a bulldog, you may not know this… but they are extremely high maintenance. Luckily, my husband and I have only had bulldogs so we are familiar with the breed and the health issues that accompany these beloved nuggets and as such, we were prepared. However, we weren’t prepared for how sickly he would be at the beginning of his life, which coincided around the time he was at Dog Training Now. Not only was he ill with food sensitivities (which we corrected with a grain free diet), but he seemed lethargic and not overly energetic for a puppy – everyone would describe him as “chill,” which he certainly is, but he didn’t have that friskiness of a new puppy. Come to find out, he has hypoplastic trachea – in lay terms… a very small trachea. Jabba’s trachea was so small to put it in human terms, it would be like us breathing threw a straw.

During these weeks of Day Training, there were a few times I would have to keep Jabba home due to his being ill. Further, while he was at DTN, he may not have demonstrated the energy necessary to be “taught” all day. Every trainer was so kind and understanding to me and demonstrated an authentic concern for his well-being. On his final day of training, Marcus pulled me aside and said, “Unfortunately, Jabba is not going to graduate today.” My heart sank as I thought that meant that he was not “trainable,” but rather, what Marcus really meant was that DTN did not feel he should graduate since he was unable to get the full experience of training to really master those skills due to his absences and illnesses. Instead, Marcus extended Jabba’s lessons to make sure that Jabba exhibited a solid knowledge – DTN stands behind their brand and curriculum. They don’t want dogs to just “sorta get it” – they want their graduates to excel and be representatives of their training upon graduation.

Aside from their expertise and their methods, what differentiates DTN from other training programs is the HEART they put into their business. 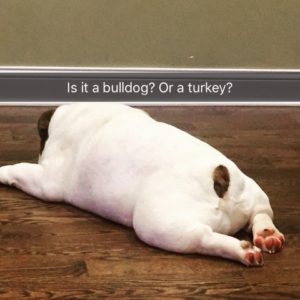 How does your dog make you feel now?

After Jabba’s soft palate surgery (which helped to open his airway), he got his energy and spirit. I am thankful that our family was familiar with the breed and ready to give him the care he needed and deserved. I think that the love, care and patience we had in those early months has translated to an extremely loyal and loveable pup. I know everybody says this about their dog, but Jabba is the BEST dog. I am so thankful he is in our lives. It has only been 2 years and it saddens me that he won’t outlive us all because I can’t imagine him as not part of our family. Everyone that meets Jabba falls in love with him 🙂 And Jabba demonstrates his love in return with a “hug” – as you pet him, he will lift his paw and place over the arm petting him (either that or he is trying to keep your hand in place to continue to pet – LOL!) 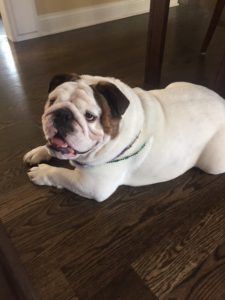 What compliments have you received since your training?

I hear time and time again… “He is so well trained for a bulldog!” “He seems really smart!” I have also heard about his great temperament and how well-mannered Jabba is. It has been over a year and a half and he still knows his commands. And to ensure those skills don’t get rusty, we have him return 1x a month to DTN for a refresher.

Thanks, guys! You have made a difference in Jabba’s life!!! 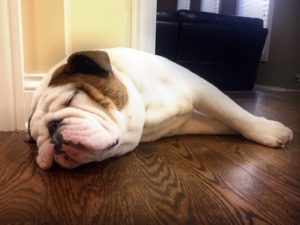